Every Computer is basically a Calculator.
And do you know how to push a calculator to its limit?

The FACTORIAL function. Obviously, there are some other methods but it is the easiest one indeed.
So, I compared the new Operating Systems like,
WINDOWS 10 and Android Lollipop with Python 3.4.3 IDLE.
Firstly I checked the Famous 65! (Ya! the limit of most of the
CASIO Calculators).Then eventually I increased the value and while in,
fact(171)
Lollipop just gave up already!
Windows 10 and Python IDLE were pretty good actually,
They just kept going. I have to admit this Windows 10 is better in terms of performance than the previous versions of Windows.
But at last in,
fact(3249)
Windows 10 gave up too.
Lollipop had just shown upto 6 decimal numbers then it summoned
the exponential function to save his ass. Windows 10 had proudly
shown upto 30 decimal numbers and then did the same.
But, on the other side Python didn’t stop at all.
As I expected. 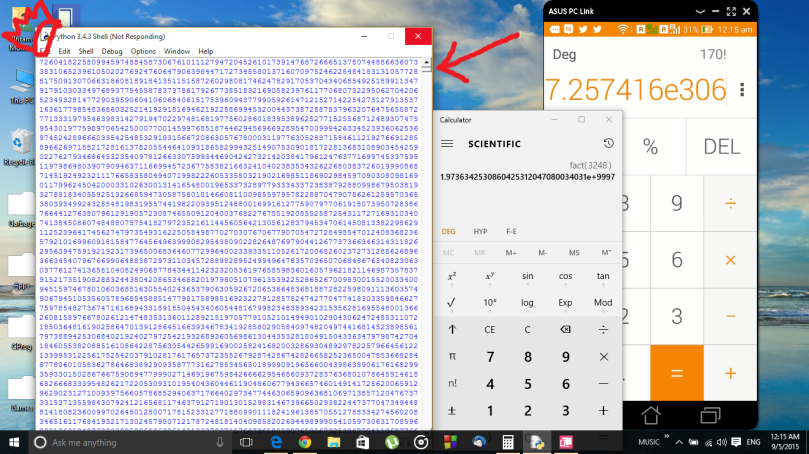 Operating Systems are the greatest abstractions made by the developers. Developers focus on the User Interface of an OS to make it as friendly as possible but that compromises some serious computing performance. So, as the Python IDLE actually work at hardware level, it gets to use the Quad CORE i7 Processor at its full potential. Wonder how much it scored?

Actually Python is not an abstraction, It basically shows how much
my Processor is capable of. But still for the stat lovers,
I have tested fact(1000000)
Yes! ONE MILLION . and moreover I got the result as it is, without any kinda exponential drag. See the numbers and the scroll bar in the picture. So, you guys now might have an idea of how much potential and power your Processors houses, and how less you get to use actually, because of these abstractions!!
We have to make more efficient codes in the future, till then use CLI instead of GUI for greater and richer Computation, if you already know it teach other people. Do not rely much on GUI based Operating Systems.